Following 18 years of successful use of Solutek Organic Solution by Cairns Water, it decided to introduce it into a new and problematic sewage network. The Port Douglas (Douglas Shire) area was amalgamated into Cairns Water and the maintenance and operation of the network and Sewage Treatment Plant became their responsibility.

The restaurant precinct at Port Douglas was generating a vast amount of Oil and Grease. Due to an ineffective Trade Waste management system the pump wells were performing as communal Grease Traps. The accumulating organic load (Oil and Grease accumulating on the aqueous phase) lead to septicity, odour and corrosion issues within these pump wells and the network.

The disproportional amount of well washing and education, along with sewage surges through blockages and network repairs/replacements and after-hour’s operator call-outs became an operational expenditure burden too great to ignore.

Solutek Organic Concentrate was introduced into 7 pump wells to reduce the accumulation of Oil and Grease in the restaurant precinct and in the pump wells that were subject to septicity due to extended retention times near the extremities of the network. Remarkable results were achieved in Phase 1 during 2010 and 2011; Phase 2 is currently under way and further information can be made available on request. 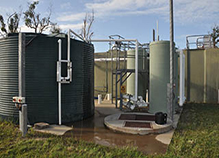